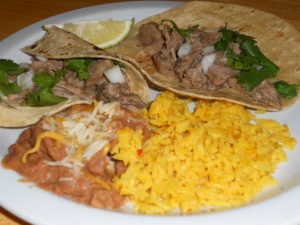 My life changed when I tasted this recipe.  It is amazing, I mean amazing.  Mr.Picky suggested I go set up a stand on the corner for extra money, he said “they are so good you could make some good money”.  We ate them twice the first month I made them, and will forever hold a place in my recipe box.  This recipe comes from My Kitchen Escapades: Pork Carnitas, and I thank her for sharing.

There are no changing needed for the recipe.  Although sometimes I skip the step of crisping the meat.  You can easily make the meat the day before or earlier in the day and heat it up easily.

We serve this the carnitas as a street taco in our home.  But would be great filling for enchiladas or on nachos.  Did I mention you should try this recipe?

Adjust your oven rack to lower/middle and heat oven to 300 degrees.

Combine all ingredients including spent halves from oranges in a dutch oven.  Bring to a simmer over medium/high heat.

Cover pot and transfer to oven.  Cook about 2 hours at 300 degrees.

Remove pot from oven.  Using a slotted spoon remove meat to a bowl and discard any remaining solids.  Reserve the liquid in the dutch oven.

Over med/high heat reduce the cooking liquid until about a cup remains.

Once reduced add meat into liquid by shredding or slightly breaking apart the chunks.

You can stop at this point and toss meat to coat in gravy and serve.  In the original recipe you can place the meat onto a sheet pan and crisp in the oven.  We did not care for it this way and like to eat it just tossed in the gravy.

*When we serve this as street tacos we use half corn/half wheat tortillas, meat, diced raw onion, chopped cilantro, and a wedge of lime.  Mr.Picky eats this without cheese which is a huge step and will eat leftovers any day.

I love to dip and eat tortilla chips, salty and savory is what I crave.  Not super fond of a guacamole with no chunky goodness.  This is how I make my guacamole.

Combine all ingredients in a bowl. 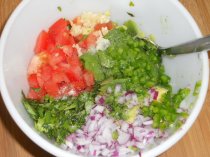 Mix with a spoon until desired texture is reached.  Refrigerate with the pit of one avocado in the bowl, this will keep your guacamole from browning.

Serve with chips, veggies, or as a topping.