A while back my Grandma sent me home with a container of green beans and red potatoes prepared out of the garden.  That night for dinner I served it cold as a side and the kids went crazy.  Never before has my daughter even cared for green beans.  I am sure it is just because Grandma made it.  I told Grandma they were great and I needed a recipe to share.

She called a while later with four ingredients and I was amazed, it tastes so much better than this simple recipe.  We ate it both hot and cold.  At one point we ate it with meatballs and tomato sauce poured on top.  What a great healthy versatile dish.  Thanks Grandma.

Steam beans until tender crisp and steam potatoes until fork tender in a separate pot.

Meanwhile in a bowl that has a fitted lid combine garlic and oil.  When vegetables are ready toss into bowl and season with salt to taste.  Replace lid on bowl and shake until evenly combined.

I took a gamble and stepped out of the box on Spicy Orange and Sweet Potato Salad.  I am a huge fan of sweet potatoes.  I prefer them any day to a regular white potato.

I tested this salad out at the birthday party for the kids.  Every summer event there is the same old  variation of potato salad which I do love but  I can’t help but mix things up.  This salad was a big hit and turned out great.  Thank you Rachel Ray, this recipe was published in the Everyday with Rachael Ray magazine June 2013 issue.

I doubled the recipe for the large crowd but probably could have kept it the same.  I guess not everyone has the love I have for sweet potatoes.  Or maybe I just always over-estimate how much a crowd will eat, but I suppose that is better than underestimating.  When hosting I always fear I will run out of food.

Peel and cube cooked potatoes and place in a large bowl.

Whisk together zest and juice of orange, chipotle pepper, and cumin.  Pour over potatoes and toss to coat, allow to sit for about five minutes.

Meanwhile stir together mayo and cilantro.  Now combine it all and season with salt and pepper. 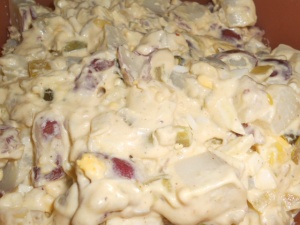 Mr.Picky and I were assisting his parent is a large garage sale last week.  Knowing we were going to be tired by the end of the day we decided to BBQ each night.  We had my spinach chicken burgers one night and some bratwursts planned but needed a side dish.  I came home and with the ingredients I had on hand made this potato salad.  It was a hit and will make it again.  I am glad I just remembered to write down my  ingredients as I went.  Most of the time I will create and never be able to do it again.

This salad was chunky and did not have that dry quality a lot of potato salads have.  It has a brightness to it and my mother in-law who does not like dill pickles gave it a A+.

Steam potatoes peel and all, and allow to cool.  Once they are cool, cube into bite size pieces.  Placed salad ingredients in a bowl and set aside to work on my dressing.

Combine all dressing ingredients in a bowl and whisked until smooth.  Taste it and adjust the flavor to your taste buds.  I thought I had made too much dressing but it was perfect once it was on my salad.

Salad will taste best after chilling in the fridge for a couple of hours or overnight.

This was a family favorite growing up.  It is a great flavor filled dish that is not only cost effective but feeds a crowd.  I remember when I first married Mr.Picky and asked if he ever had tried German Potato Salad.  He said he did, and didn’t like warm salad and thought it was”gross”.  I never made it after that comment.   I don’t think I was used to his pickiness at that point and tried really hard to please him.

Eight years later after many cravings, I decided to just give it a try.  I looked up a recipe on Allrecipes.com and made it one night, and just called it potatoes.  Mr.Picky went up for thirds that night and kept going on and on about the potatoes.  I just about cried.  Not only was I sad that I had given up my one of my favorite side dishes for eight year but was happy that he loved it.  I mean what is not to love onions, bacon, and potatoes.  Anyway, made this the other night and wanted to share.  Sometimes not naming food, and just serving it really makes a difference. 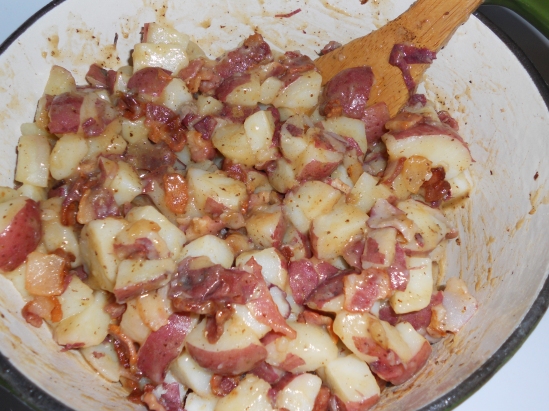 Peel potatoes or use reds and don’t.  Boil until tender but firm.  Cool, and cube or slice (I cube).

Cook bacon in a dutch oven until crisp, remove bacon and reserve grease.

In a sm. bowl whisk flour, sugar, salt, celery seed, and pepper.  Add to onions and stir until bubbly.

Remove from heat and stir in water and vinegar, return to stove and bring to a boil.  Boil for 1 minute.

Carefully add bacon and potatoes and gently heat through. 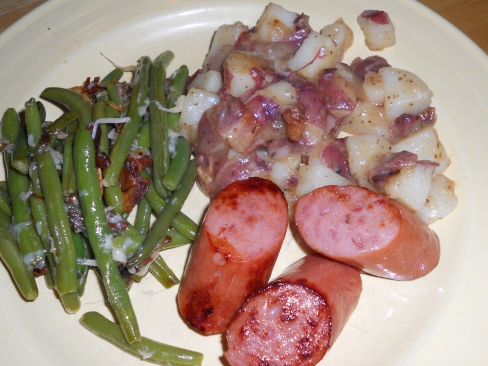 Look out, this is what we had for dinner and I will share these wonderfully delicious recipes with you soon. Kielbasa Sausage, Garlicky Green Beans, and German Potato Salad.